Columba Graduates Grow A New Class Of Leaders At Glendale 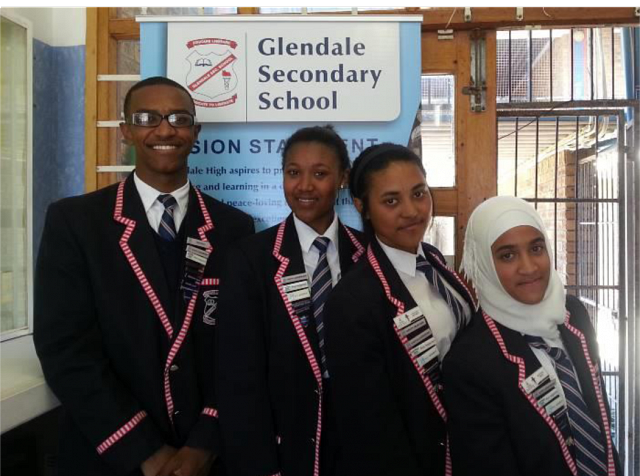 When young people are developed into leaders, they become agents of change in their school, community and country. At Glendale Secondary School, the first group of Columba graduates have not only become change agents themselves, but nurtured and developed their peers into honorary Groundbreakers, creating a legacy of youth-driven leadership in their Mitchell’s Plain community.

eónaid Kabiah, Safiyya Jinoo and Courtney Bestman stand confident and proud in their red-and-white trimmed blazers that are adorned with badgesof achievement. Peer counselling, youth, Lifeline counsellor, RCL member representative council of learners), debating, quiz team and prefect are just some of their accomplishments to date. This year, Courtney is also the deputy head girl, which means she will be made head girl in her Grade 12 year in 2015.

ayson George, 2014 Head Boy and 2012 Columba graduate, has played an important role in the girls’ lives, mentoring them on the Columba values and inspiring them to get involved in a number of service activities at the school. “When I arrived in Grade 8 I couldn’t speak in front of people, I couldn’t interact with people and the activities definitely bettered me,” says Safiyya. Now she is able to address an assembly of more than a thousand children.

Seónaid adds that she has become more responsible, better able to identify the consequences of her actions. “And you’re able to guide other leaders as well,” says Safiyya. Their change also had a positive effect on their academics. “It broadens your horizons and it broadens your understanding,” says Courtney. They say that some of their peers joined them in their efforts to get more involved in the school, while others distanced themselves from the group that was beginning to stand out. “We developed a love for participation, grabbed every opportunity!” she says.

As a counter to the gang culture that has become entrenched in the community, the school management introduced a badge system – a mark of pride to counter the ‘chappies’ that are the marks of gang membership. “I feel very proud of myself knowing that I have achieved. A few years ago, I wouldn’t expect myself to be at the point where I am now,” says Courtney. “I feel different, mature,” she adds.

Safiyya feels honoured to be seen as a role model in her community. “The youth kind of look up to me because of the way I dress when I come out of school, the way I speak, the badges I wear,” she says.

 Continuing the legacy of leadership values set out by Columba: Jason George, Seónaid Kabiah, Courtney Bestman and Safiyya Jinoo. Next year, they are going to start a women’s empowerment club at school. “We will assist girls of the school to become more confident in themselves, to higher their self-esteem, to be more responsible, and to get to know themselves,” says Seónaid.

In service to their community

The girls exemplify the Columba value of service and feel a keen sense of social responsibility for their Mitchell’s Plain community. “You should put your leadership skills to work. You shouldn’t just go to the classes, you should apply them to make a difference in your community and in your life because it makes you different,” says Courtney. “If you lead people or if you help them, they also receive the confidence to become a leader themselves or to better themselves,” adds Seónaid.

Despite juggling school, home and service commitments, the girls are determined to persevere by staying focused on their goals and always being aware of those around them. “I think it’s because you have that need or desire to make a difference in the community because you see so much that’s wrong and you just want to make a positive difference,” she says. Safiyya is driven by her personal desire to succeed, and making her parents proud. Courtney loves a challenge. “To know that you are victorious – if you’re proud of yourself, it makes you happy.”

They are excited for the next batch of Grade 10 learners who will be going on the next Columba Academy. “I do feel excited because I know that there are going to be other people who are able to lead other than ourselves,” says Safiyya.

Jayson also suggests that previous Columba graduates who are perhaps home from their university holidays could actually come back and run their own leadership camp based on the Columba values at school. “We can come and give back in that sort of way,” he says.

At home too, the girls are considered role models. Courtney hopes to become a mathematician after school. This will not only satisfy her own passion for the subject, but be a good example of success for the younger members of her family. “I want to give my nephews and nieces not just hope, but to show that there are more opportunities out there,” she says. She looks forward to the experience of university, achieving her goals and becoming independent as a woman.

Being a leader also comes with difficulties, of course, like other learners getting jealous or refusing to submit to the authority that comes with a prefect badge. “You are always the good role model when it comes to how you are dressed. Others, I believe, are following your example, emulating you,” says Principal, Mr Achmat Chotia to the girls. Eventually, he says, this actually leads the other learners to changing their behaviour for the better in accordance with the pride they feel when wearing their smart school uniform. “You don’t realise the impact that you have on the school!”

The girls offer some good advice to other young leaders: