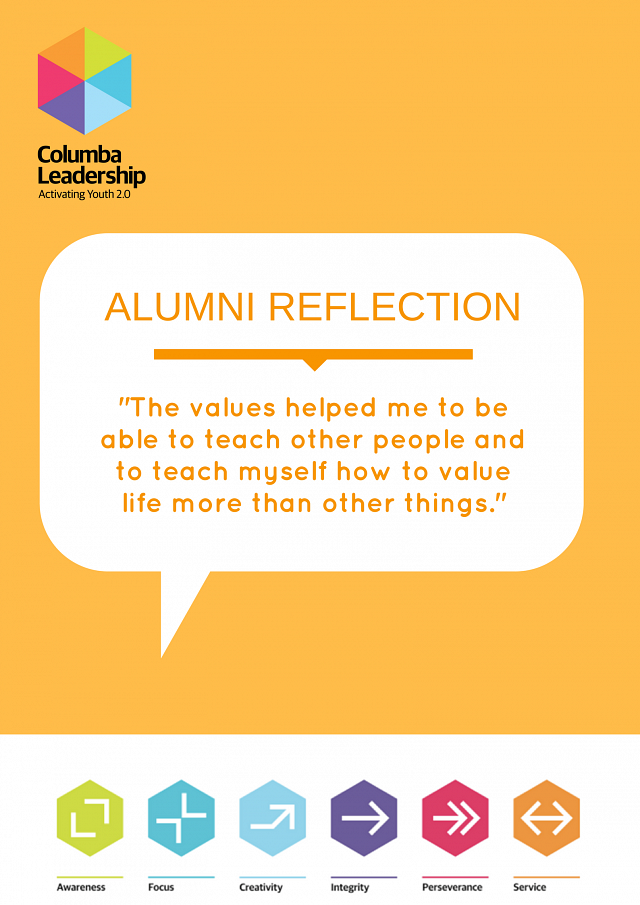 ‘I applied to be part of Columba because I felt like there was more for me to learn and it would give me an opportunity to change my community and have a greater future for myself. I live in a community where most of the youth in my community forget that we need to educate ourselves to get a better future; they mostly want to have fun, drinking and partying. Before I became part of the group I was a very naughty child because of the crowd I hung around with since primary school, but when I became part of the group it suddenly changed. Columba showed me a better path. It gave me the key points to say, ‘okay, I’m able to do things not only for myself but also for other people’. I used to be a very selfish person keeping things to myself and doing things alone so now it gave me the platform to speak out for other people, give out my opinions and share.

Before the academy I was the kind of person that would encourage my peers to do the wrong things instead of supporting them for the right things. Instead of letting them study I would make them dance around, have fun, play music in the class. I would do that because I knew that I am very good academically so I thought let me distract them to see how they are going behave so that I can be on top academically all the time. I use to bunk classes when I felt like today I’m tired of this place or teacher.

The most important thing I took from the academy is the value of integrity because I’ve learned that if you don’t have integrity within yourself there is no way that you are going to be able to share it with other people. That value helped me a lot. I was able to be honest with who I am and honest with other people. I was able to advice people what they should do with their lives and I knew what I wanted to do with my life because I always had a dream of being a medical doctor but because I was naughty I almost forgot the goals I set for myself.

Columba changed my life: I grew up in a family where we never had much to do especially after my father passed away. I was 9 years old at the time of his passing. We struggled for a few years and I grew up being angry at the situation and at everything and everyone. I came to high school with that anger but I never told anyone about my feelings. Going to the academy showed me methods of how to deal with things that are going on in my life. I learned how to speak to other people and get to trust someone. I was motivated to find someone I could talk to and open up to so that I could find help. It helped me to focus on things that matter. I had to focus on doing my best to change my situation by building a better future for myself and not focus too much on problems and situation at home. I have all the skills I need to move forward.

I was able to come to terms with my father’s death, let go and move on and be able to speak about it. My communication improved in the academy and that helped me to open up. It took the weight of my shoulders. I felt like with the Columba group I had enough support.

Integrity allowed me to build relationships with people because I became reliable and they could trust me. It helped me to help others achieve their goals. It helped me become a mentor to younger learners. I taught them the values I learned at Columba and John Maxwell books on leadership.

The Columba program opened up a lot of doors for us. It helped us to be able to support everyone not only outside the school but in the school as well. It made it easy for us to deal with what people said. It showed us the importance of commitment. It taught us that working as a team is much better then working alone. A man may work alone but he can’t build a bridge alone, he needs others.

I established an organization with a friend it’s called ‘Building Minds Fast‘. After the academy I felt I could do more to support change. Some other Columba members are also helping us. We focus on social change. We go from primary to tertiary school doing projects, teaching people about safe living, environmental care and how to make the world a better place. I had talks with agape youth who would give use guidance in our programme. We also want to give counselling and create jobs for the youth so that youth unemployment can decrease. Youth want to be pushed to do better. This organization will help them to start enterprises and create opportunities instead of waiting for opportunities. I also joined Significant African souls and they motivate and mentor primary school learners. I also assisted within the school during the study period we would help learners who studied at school.‘

This learner is currently studying Medicine at University of the Witwatersrand.